You may be wondering if there's anything significant that Win 7 changes with regards to drivers...after all, it's pretty much Vista, isn't it? Well, whilst the latter may be somewhat true, that doesn't mean that there wasn't any room for improvement or that improvements are scarce. Quite the opposite, actually...at least when it comes to graphics drivers.

As many of you recall, Vista shipped with a new driver model, dubbed the Windows Display Driver Model (WDDM- thank your deity of choice for abbreviations) 1.0. The new (at the time) Aero Glass interface and other goodies required it in order to function. With Win 7, we get a new improved and perky WDDM 1.1 (however, wddm 1.0 drivers should work, with losses of functionality/advantages). 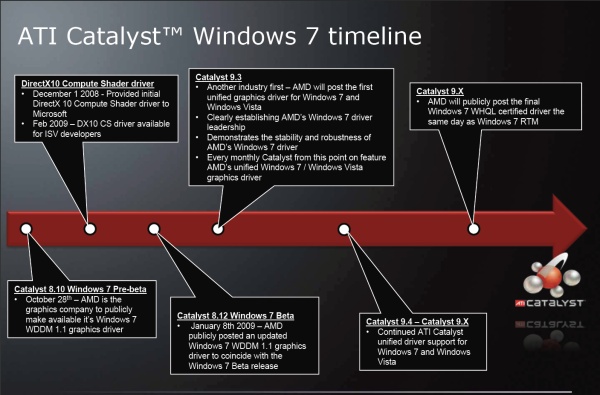 This 0.1 version increase switches from DX9 to DX10 for the Desktop Window Manager (DWM - yes, give thanks again)- this is the dude that, putting it simply, handles rendering your desktop with all of its wonky glassiness. This move is touted to bring performance benefits, mainly in the area of memory consumption with more windows splurged across your desktop. Microsoft suggested an up to 50% reduction in memory consumption per window.

Since we saw a graph illustrating this behavior, and it looked pretty awesome (we can't show it to you due to legal reasons, sorry), we tried to replicate it via our own experimentation, since we have a fetish ... try as we might, however, the results weren't quite as outstanding, irrespective of whether we dabbled with ATI or nV. Whilst there are certain benefits compared to Vista, they're not something you'd normally notice/care about (unless you had 100+ windows open and a rather low amount of RAM installed). Since our graphs ended up being lame, we're not going to post them, and instead we'll give you the short story:

So, in short, whilst it is obvious that tweaks are in place, they're not something that will change your real-world experience (hopefully, this formulation hasn't been trademarked yet).

Moving on, there's a new Direct2D accelerated 2D graphics API (yes, we know, that's as unexpected as Luke's paternity), designed for interoperation with existing code that uses GDI/GDI+ or Direct3D.

However, what is interesting (to us), is the fact that performance in DX10 titles should be superior to that experienced when using WDDM1.0 drivers, mainly due to improved/tweaked memory management. Jumping ahead, we've seen some of this in practice, and we're working on an interview which should provide some insight into this-stay tuned, as it should be out this decade, honest! The rest of the improvements are not quite grand, albeit nice, with the new CCD API likely to be appreciated by those unlucky souls that have to battle 4:3 projectors/external displays as they're giving presentations from their widescreen laptops (we feel your pain): 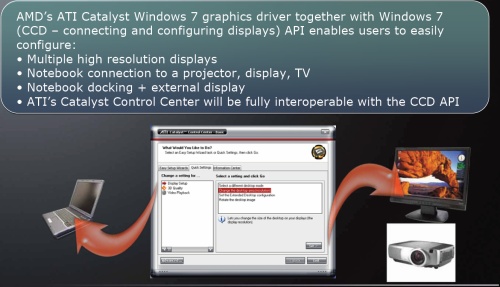 Another interesting aspect is that, by ATI's and Microsoft's admission, the Win 7 Aero desktop was designed using DX10.1. What this amounts to in practice is hard, if not impossible to gauge since not many details have been provided. WDDM1.1 support isn't conditioned by 10.1 capability-nV's driver is happily supporting WDDM1.1, whilst their hardware is yet to implement DX10.1- and in the time we've had to toy with Win 7 on both DX10 and 10.1 capable parts we weren't able to spot any differences. However, we'll hazard a guess that ATI will do some more “chest-beating” over this since it's a fairly important perk for them.

Finally, you should be aware that from the 9.3s onward, all ATI Catalyst releases will deliver an unified driver for Win 7 (WDDM1.1) and Vista (WDDM1.0), for the HD2000 series and higher. It's still unclear what will happen with older cards, but we're investigating. The Win 7 and Vista drivers should experience feature parity, with everything supported by one being supported by the other. 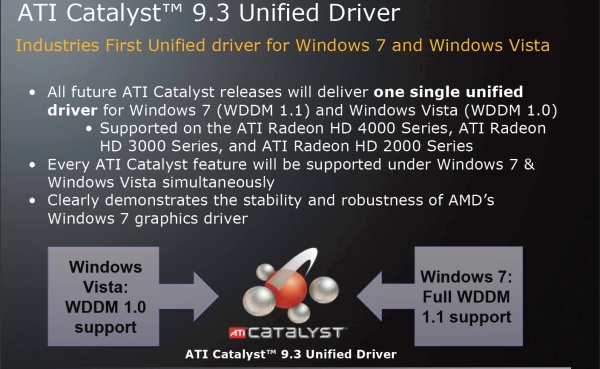 With all this in mind, time to see what happens in practice!