The user interface is simple enough, but we will break it down even further as the basic functions are the standard SLI switches of which you are familiar.

The Modes in Detail 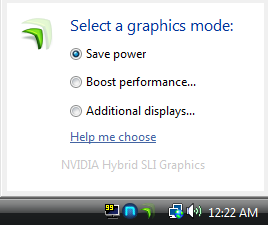 Save Power: This mode shuts down the discreet GPUs completely. Everything is run off the IGP. This is the mode that SLI enthusiasts will love. It takes less than 2 seconds to enable and will decrease the heat and power output of your system significantly.

Boost Performance: This mode is a little less obvious. It fully enables your discrete graphic cards and SLI solutions. All rendering data from your discreet graphic card is passed through the system bus to the onboard IGP to handle final render output. This allows for you to keep your monitor connected to the motherboard as seen in the diagram below rather than the desktop GPUs.

Note - the current Hybrid Power connectors do not support dual link DVI and support a maximum resolution of 1920x1200.

Additional Displays: This mode is fairly self evident. It will disable SLI completely and allow for your various graphic cards to be used to setup multiple displays. The primary display is still the onboard IGP, which introduces one of our few disappointments with this tech. We believe that, if your going to enable multi monitor and turn all your GPUs back on, you should at least have access to your most powerful rendering device.

Currently the support list for Hybrid power is short, and is only supported on the AMD platform: 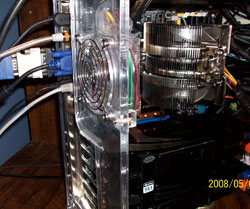 GPU Support: 9800GX2 and 9800GTX. That's it. The 8800 series is not supported. According to Nvidia, the 9800GX2 and 9800GTX have a special switch which allows for "powering on and off" of the GPUs via the SMBUS. This switch does not exist in earlier Nvidia products. It should also be mentioned that that not all future Nvidia cards are going to support it either. Nvidia views this as a "high end" feature and, to be fair, they are right. Few people with low end 8500 GT cards are terribly concerned about their power output. However, future high end Nvidia cards should also support Hybrid Power.

Motherboard Support: Hybrid Power is currently only supported on the AMD side of things. The first chipsets to support it being the Nforce 720A, Nforce 730A, 750A SLI and 780A SLI chipsets. Nvidia says it plans to introduce this support to the Intel platform with future motherboards, but wouldn't give much more details beyond that.

Power Supply Support: Remember the confusing list from the 9800GX2 Supported PSUs? Well this one is just as confusing. Nvidia provides an up to date list of PSUs which have passed their certification process for Hybrid SLI:

Note - you may be able to get away with another PSU, but Nvidia can't guarantee stability on any PSU not in their list.