The mainstream “proof-of-concept” will be the updated AVIVO Video Converter. Now, this application has been with us for quite a while, but up until now it was solely a very optimized CPU-based SD-video encoder. Its December release takes the plunge and leverages HD4xxx cards in order to do up to 17X faster encoding (see the attached presentation for details), whilst also adding support for HD formats. Since it's also free, it's probably going to get a lot of people interested in what a GPU can bring to the table, beyond rendering Crysis or FarCry 2. 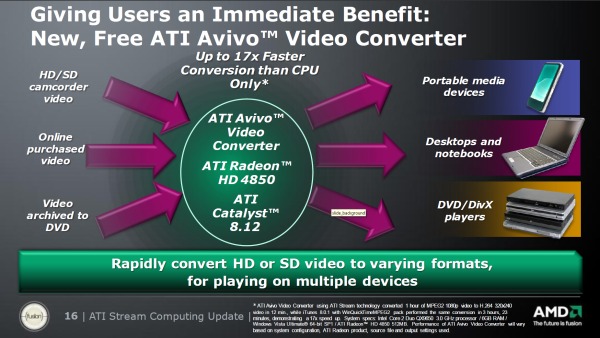 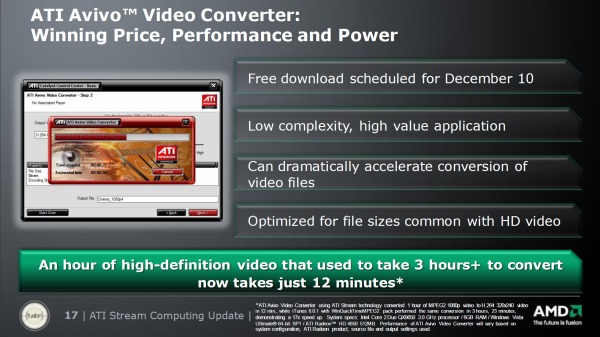 If one wants to be more adventurous about his video work (and also has a few dollars to spend), in 1Q 2009 both Cyberlink and ArcSoft will have more advanced software packages on the market, both of which will take advantage of ATI Stream. 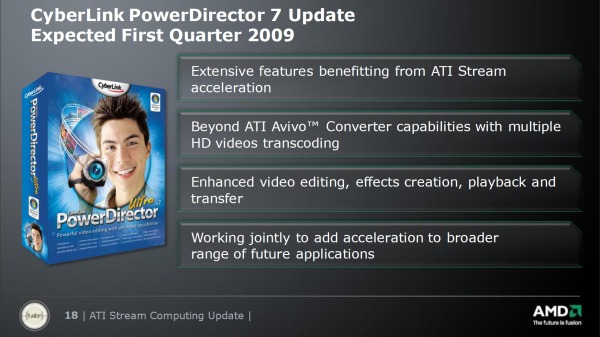 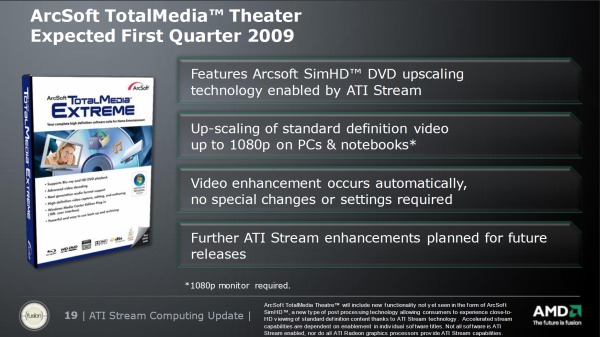 Other than those, you can already experience the benefits of GPU acceleration in applications from Adobe (Acrobat Reader, Photoshop CS4, After Effects CS4 or Flash 10- all of these are IHV agnostic, using either OpenGL or DirectX to leverage GPUs) or Microsoft (Vista, Expression Encoder, PowerPoint 2007, Silverlight - once again, all are IHV agnostic, using DirectX and not Brook+ or CUDA, and if you didn't know about PowerPoint 2007 being GPU accelerated don't worry, few do, the setting is quite well hidden for some reason). Once again, we'll direct you to the attached presentation for more details.

Moving on to the developer side of things, the 1.3 update should bring a complete rewrite of Brook+ (see our Q&A with ATI's Stream Team at the end of this article) - this is something we're awaiting with bathed breath, as Brook+ hasn't provided the most enjoyable experience possible up until now, and there was a certain delta between it and the competition in terms of accessibility. Also, performance should go up, and support will be extended to more parts: the new Firestream 9270, as well as the HD4600/4550/4350. Speaking of the new Firestream card, it's a rather impressive beast, aimed primarily at the HPC market (High Performance Computing): 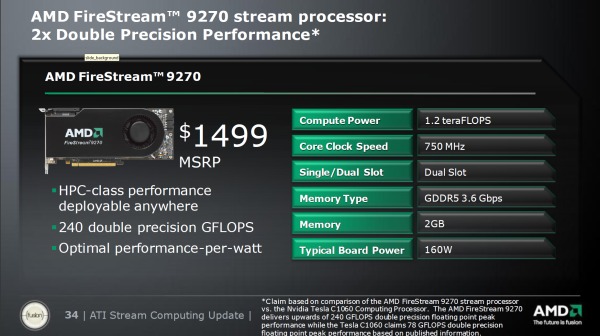 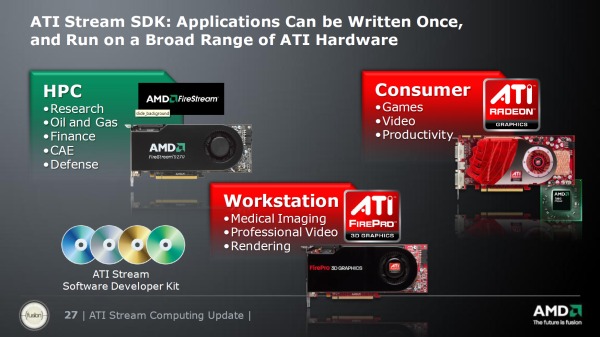 In closing, we'll urge you to read the whole presentation AMD provided, ATI's Stream Computing Presentation (TEMPORARILY REMOVED), since it goes into further details and provides performance numbers, which are always interesting. Also, please go through our Q&A with ATI's Stream Team on the following page, for further details about some of the included topics.

The message AMD tries to convey, as we see it, would be this: we're here, we're focused on Stream computing, we know we were somewhat under the radar in this area but we're changing that, we're looking at adding value for our customers, as well as looking at ways to help make developers' lives easier. We're giving interested parties the proprietary tools they need to start developing now, but in the future we're completely behind industry-wide standards, as opposed to proprietary solutions. If you've ignored ATI's Stream up until now, we're giving you reasons not to do so any more.

AMD have shared that they should be providing us with an early build of the 8.12 Catalysts that will implement all of the aforementioned goodies in the coming weeks, so we'll get a chance to see for ourselves how all of the aforementioned aspects materialize. We're quite interested in seeing how Brook+ will evolve, since there's still quite some time left until OpenCL and DX11 will hit the market, and until then if one wants to do GPGPU development on AMD GPU's that's what they'll use, as well as comparing the new GPU accelerated AVIVO with an optimized, multi-threaded CPU only encoder, both with regards to its speed as well as the quality that can be achieved.

Lets move on to the Q&A session, shall we?