ATI offers three rendering modes, all of which are automatically chosen by Catalyst AI. The first mode is an Alternate Frame Rendering mode. It simply has one card render the odd numbered frames while the other card renders the even numbered frames, the frames are then sent to the Compositing Engine on the CrossFire Edition board, which then sends them on to the display. By allowing both GPUs to work completely independently of one another, AFR provides the greatest potential performance improvements of all the available modes. It's also the only mode that allows the full vertex processing performance of both GPUs to be combined.

AFR should work in 99% of the games currently available. It won't always work because some games rely on information for the current frame that is contained in the previous frame. In cases where AFR won't work, ATI has two more modes available, Super-Tiling and "Scissor".

Super-Tiling divides the screen up into a checkerboard pattern using small 32x32 pixel squares so that each card is assigned alternating squares to render. Because the squares are so small, Super-Tiling does a good job of balancing the load across the two GPUs regardless of what is being currently drawn on screen. Super-Tiling is used in D3D games where AFR doesn't work.

The third mode is called "Scissor" mode, which I guess is ATI's name for Split-Frame Rendering, where each card takes one half of the screen and renders it. The split can be horizontal or vertical, and it can be even (50/50) or uneven (such as 60/40 or 70/30). The best configuration is determined automatically for each game.

For the SFR "scissor" mode, ATI has built in dynamic load balancing so that each card works on an equal rendering load according to its capabilities and the scene being rendered. For example, if you have an X800 128MB CrossFire coupled with an X800XT Platinum, the X800XT Platinum will be given more work to do so that it's not sitting around waiting for the slower X800, thus making the most efficient use of both cards.

nVidia's SLI has two modes; SFR and AFR mode, which work pretty much the same as ATI's AFR and SFR modes. 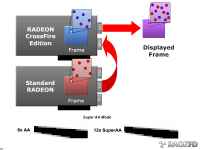 Super AA
With CrossFire, ATI also provides new Anti-Aliasing modes that won't be available on single-card setups. The new modes are 8x, 10x, 12x, and 14x AA. ATI calls the new modes Super AA, how it works is quite simple when you learn the trick.

The 8x and 12x modes are simply both cards rendering 4x and 6x Multi-Sample AA using different sample patterns, then having the results blended together in the CrossFire Composition Engine. The 10x and 14x modes are the 8x and 10x AA modes coupled with… wait for it… 2x Super-Sampling AA. Yep, ATI finally has mixed mode Anti-Aliasing. 2x SSAA isn't a whole lot of course, but it's enough to smooth out the jagged edges and clean up pixel and texture shimmering that Multi-Sampling AA miss.

An added benefit of these modes is that it effectively doubles the Anisotropic Filtering mode as well. With "Super AA", as ATI calls the blended mode, renders each pixel it does it from two slightly different viewpoints and combines them. When it does this the texture samples from each viewpoint get combined as well. This means that 2x AF becomes 4x AF, 4x AF becomes 8x, and so on to 32x Anisotropic Filtering.

This has, admittedly, been a very quick look at ATI's new CrossFire technology. I hope to add more to this preview as information becomes available, and ultimately I hope to have a complete CrossFire setup on my desk sometime soon to get a look at it first hand.

All graphics and content on this page are ©2022 Rage3D.com
Reproduction in whole or in part is strictly prohibited.