We've selected games based on their ability to stress the GPU, making them perfect to flex the muscles of the 9800 GX2.  Lets see how it measures up. 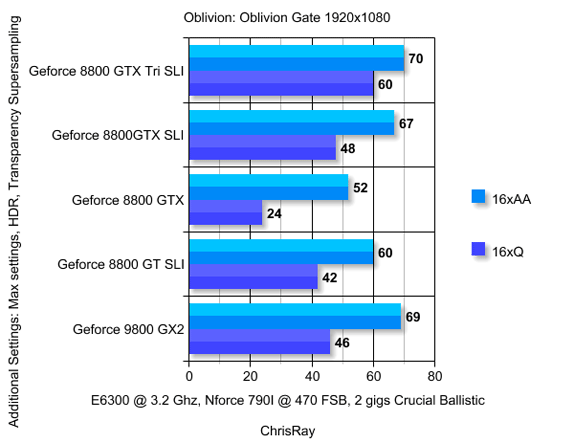 Performance Thoughts: It's amazing how quickly this title turned from one of the most GPU limited titles of its time to CPU limited on today's platforms, allowing us to enabled transparency supersampling in all tests to increase load. The 9800 GX2 performs fairly well in these tests, remaining competitive with the 8800 GTX SLI configuration with 16xAA enabled while still slightly CPU limited. At these settings, Tri SLI 8800 GTX becomes completely CPU limited. Turning on 16xQ changes the situation, with to the increased bandwidth requirements the 9800 GX2 coming out every so slightly behind the SLI 8800 GTX configuration. The 9800 GX2 consistently outperforms the 8800 GT SLI configuration due to its superior bandwidth, shader performance, and texturing capabilities. 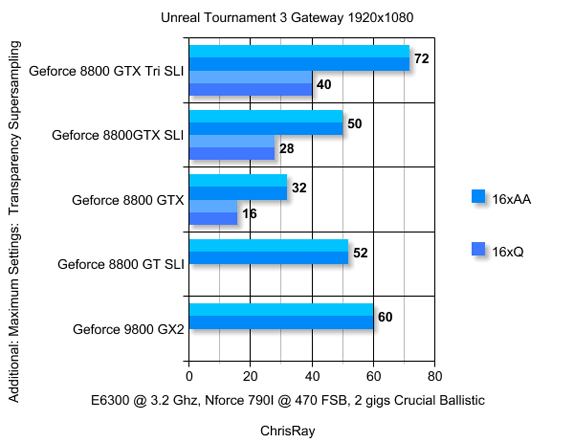 Performance Thoughts: Unreal Tournament 3 is the latest shooter from Epic games, with its strong ties to shader performance readily seen in these tests. The game appears to benefit nicely from the G92 architecture as well, with the 9800 GX2 holding a decent advantage over the 8800 GTX SLI with 16xCSAA, likely due to the increased shader performance available. Unfortunately we were unable to test the 16xQ modes on the 512 meg cards due to the game crashing with driver not responding errors when enabled at 1920x1080; we believe this to be a memory management error and have reported the problem to Nvidia. The 9800 GX2 was again able to consistently outperform the 8800 GT SLI setup due to superior shader, texturing, and bandwidth.

Notes: As many are aware, Unreal Tournament 3 has a frame smoothing option typically set to 62 to control erratic frame rate distributions. During the tests, we adjusted it to a maximum of 75, which affects both Max and Avg framerates slightly. None of the configurations tested were capable of offering 75 FPS or higher with any consistency at the settings tested so we believe these results to be very fair and balanced. 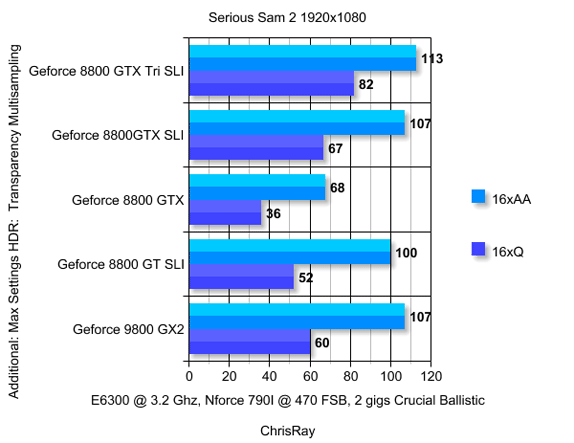 Performance Thoughts: Like the Oblivion tests, we reached CPU limitations before hitting the GPU limits several times; however, SS2 never became entirely CPU limited at 16xCSAA, and the 9800 GX2 and 8800 GTX SLI took swings at each but ultimately offer equivalent performance in these tests. Running 16xQ modes shifts the bottleneck squarely on the GPU, with the bandwidth restrictions of the 9800 GX2 placing it slightly behind the 8800 GTX SLI setup but ahead of the 8800 GT SLI by a decent margin. 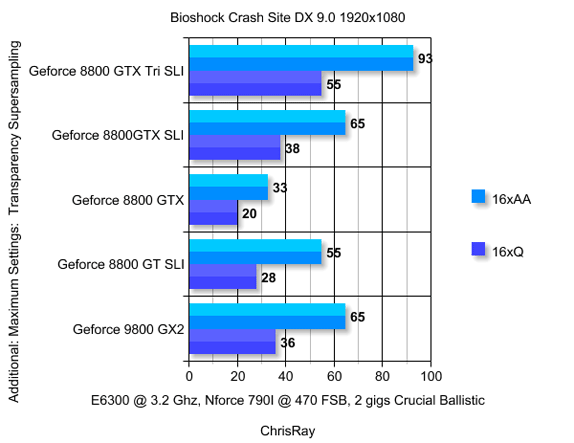 Performance Thoughts: Bioshock, one of the big games released in 2007, offers a demanding test for this roundup. We used DirectX 9.0 testing for anti aliasing support, and in these tests the 8800 GTX and 9800 GX2 run neck and neck performance wise, offering equivalent performance at 16xCSAA. With 16xQ enabled the 8800 GTX SLI control a slight lead, while once again the 9800 GX2's superior rendering capabilities allow it to come ahead of the 8800 GT SLI configuration. 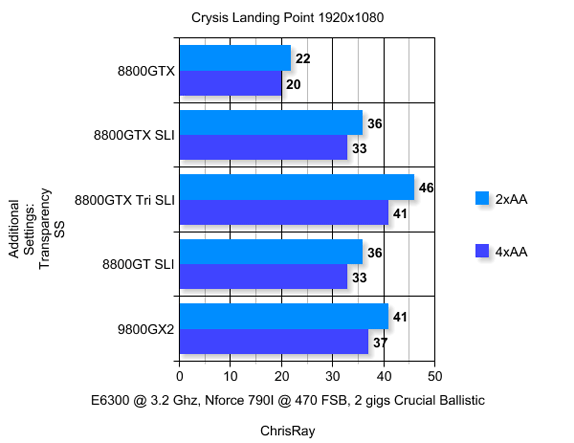 Performance Thoughts: Crysis is a title that has left many systems crying for mama this year with its insane performance requirements. Few have been able to run this game anywhere close to high end settings, and even this test system had to make some setting sacrifices to ensure the game was playable. Choosing primarily high settings, we lowered the shadow volumes to medium.  We also skipped the high end AA comparison, sticking instead with 2x and 4xAA performance options. Under these tests conditions the 9800 GX2 held a decent advantage over the 8800 GTX SLI due to its superior shader performance. The 8800 GT SLI put out some good numbers with its strong shader performance (comparable to 8800 GTX SLI) but was unable to keep up with the 9800 GX2.

Notes: This was a case where the title became too much for 512 meg cards to handle, so all tests were concluded with shadow volumes at medium. With the shadow volumes set to high, the game slowed down to 5 FPS on both the 8800 GT and 9800 GX2, with the 8800 GTX slightly better at around 17 FPS. This is one of those scenarios where the 8800 GTX's memory allowed it a considerable advantage.