Due the restriction in place by Windows XP, previous Quad setups were forced to render AFR and SFR separately, with AFR on two GPUS and SFR on the other two GPUS. While this method was effective for games requiring only one or two rendering passes for simple tasks like multi-texturing, it is not uncommon to see 6 to 8 rendering passes occur on a single scene for things like HDR and other modern rendering techniques in modern games, effectively nullifying SFR's scaling abilities. As a result, users often saw that the Quad under Windows XP was incapable of scaling beyond dual GPU performance in worse case scenarios.

Nvidia introduced Nway with 3 way SLI, with results showed similar scaling between 2 way and 3 way SLI. CPU bottlenecks aside, Nway 4 way SLI should scale well too since it shares the same pattern and simply builds off what Tri SLI started.

4 way SLI allows for 4 GPUs to be used in AFR mode, and Nway is fully backwards compatible with 2 way and 3 way AFR. As such, you wont need separate profiles to enable it: if it works in 2 way or 3 way it should also work in 4 way. With few exceptions, this will allow for a single driver for all SLI solutions. 4 Way AFR will not suffer from the many limitations that existed under Windows XP and should provide far more optimal scaling. Due to this Windows XP limitation, Quad SLI is only supported under Windows Vista platform.

Talk is one thing, but lets see the performance differences by testing the new Nway 4way AFR verses AFR-SFR in Bioshock and Crysis. 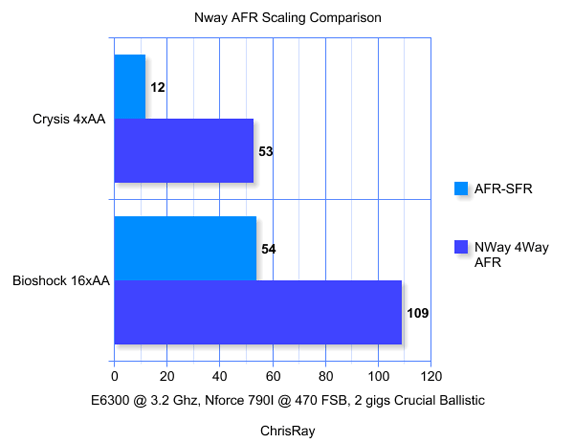 Performance Thoughts: The results are conclusive, with Bioshock receiving no scaling with AFR-SFR. Likewise, the Crysis results are a disaster, with its complex rendering engine causing major performance loss when enabling AFR-SFR. Nway AFR, however, scales perfectly under both titles, offering a very good example of the dramatic changes Nway brings to performance scaling under Windows Vista.