The Xigmatek Dark Knight packaging follows the same design cues and format as the HDT-S1283/4. Unlike those coolers, the Dark Knight adds support for Intel's latest socket 1366, coming in the form of a motherboard backplate that appears identical to the crossbow mount kit previously mentioned in the HDT-S1283 and HDT-S1284 reviews, but for no additional cost. The standard Xigmatek fan has also been replaced, with a higher-CFM 120mm fan complete with white LED's illuminating the dark black translucent blades and shroud. Additionally, the fan is a 89CFM @ 30dBA unit, with long-life 50,000 hour sleeve bearings - a significant increase over the standard Xigmatek fan. 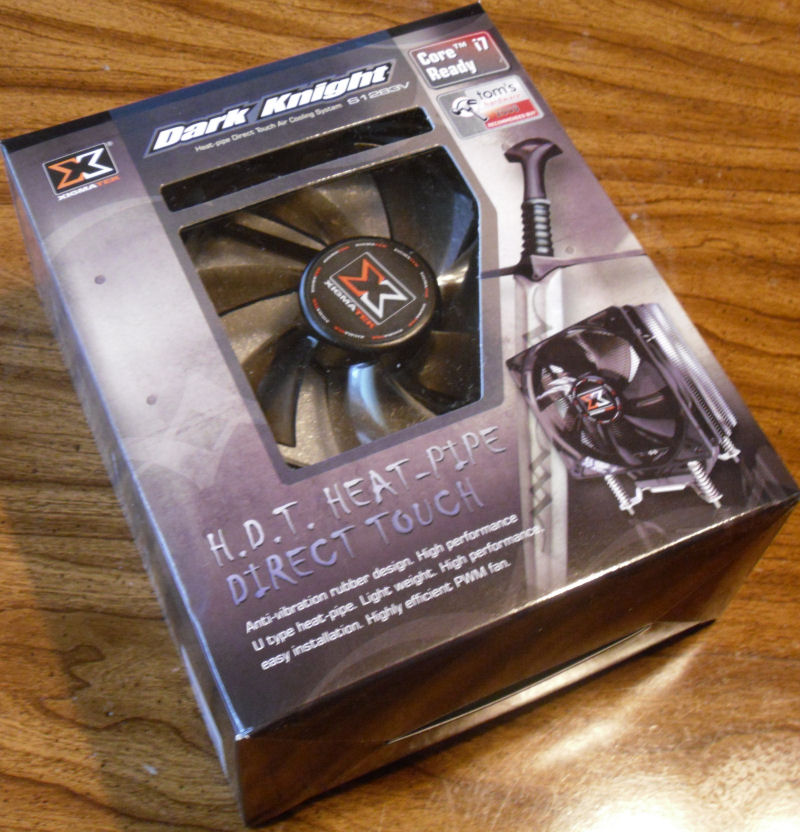 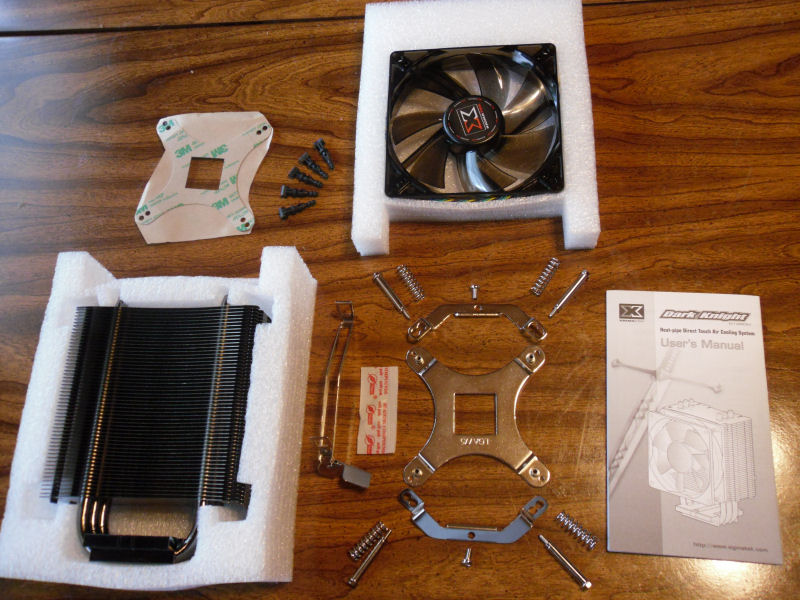 The heatsink itself is 3 heatpipe design identical to the HDT-S1283, colored black. The paint is uniform and has a nice sheen to it, exuding a significant 'wow' factor. We found it was resistant to scratches with a fingernail, or light touch with a screwdriver. The matching fan looks great paired with the tower, and has a subdued elegant glow from the white LED's in operation. The fan is quiet in use, even at high RPM; while audible it is not intrusive or irritating. With the case sitting under the desk, we couldn't hear it unless without bending over to do so. The base of the heatsink is also painted, and shipped with a plastic sticky protective film. The film peeled off easily with no residue left behind, revealing the smooth, clean base of the heatsink. 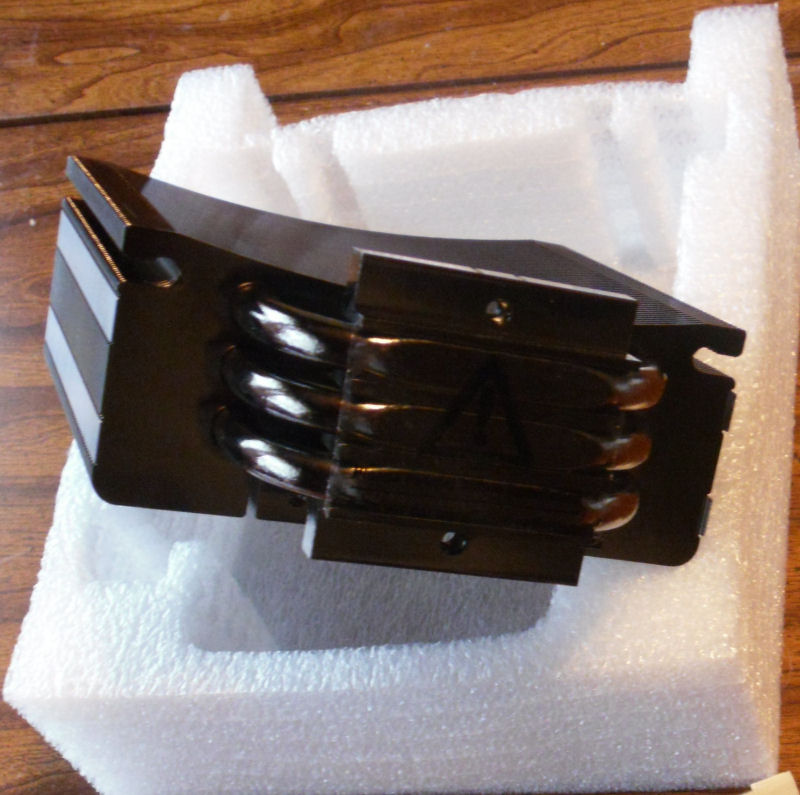 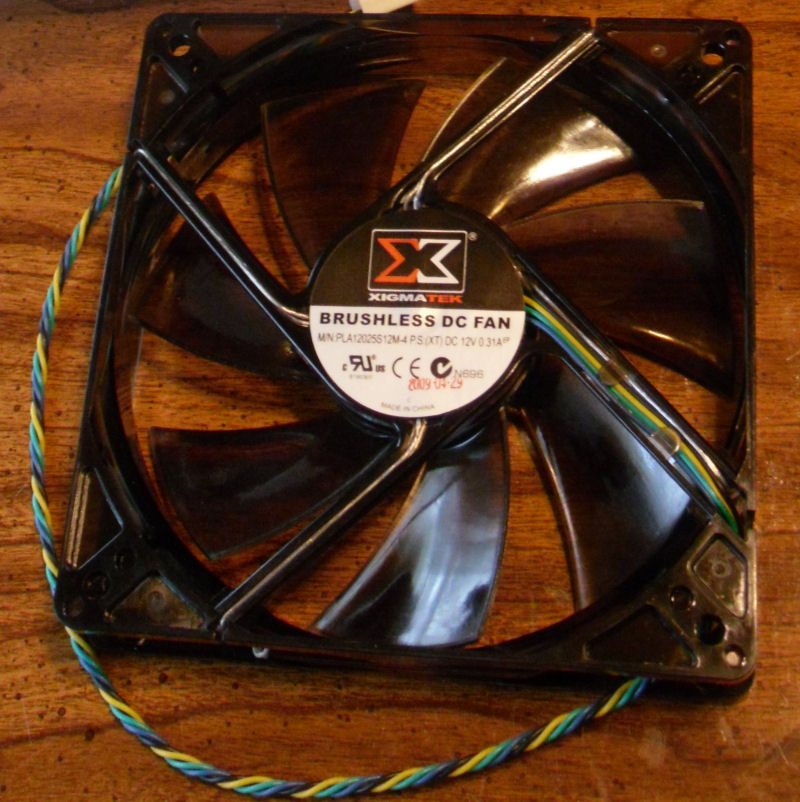 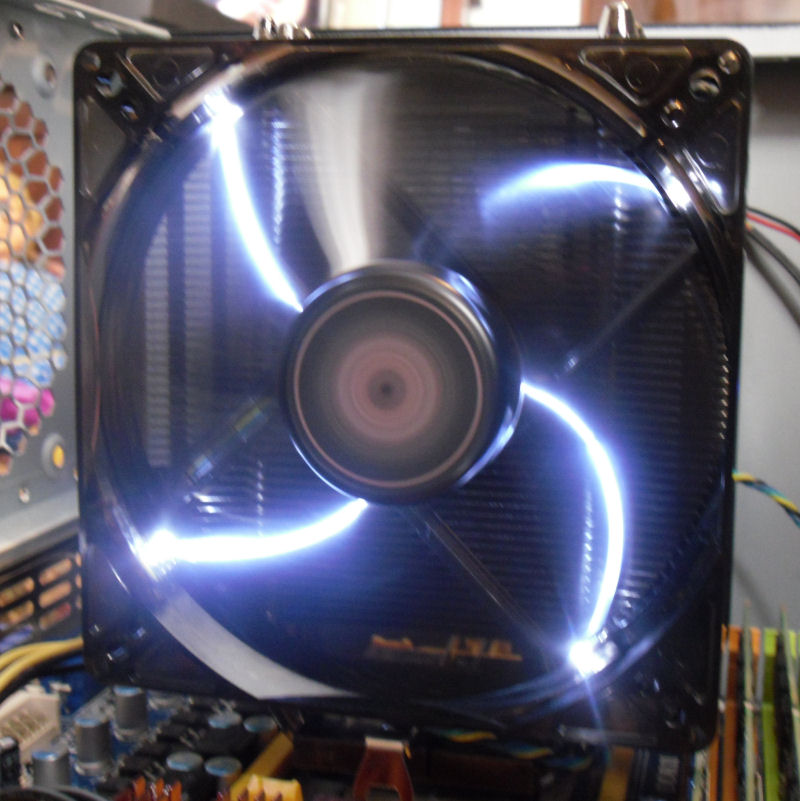 Installation on AMD sockets is simplicity itself, requiring only to slide the latch through the base and clip on one end before latching down the other.

For Intel sockets, you have the choice of Intel's much maligned push-pin design or the crossbow backplate mount. Both have positives and negatives. The Intel push-pin method is tool-less, and requires only a firm press of the finger and twist of the pin to insert or remove. However, it is not designed for multiple mountings - pretty soon the plastic pins will wear and it will be harder to achieve a solid mount. The crossbow backplate mount adds compatibility for Core i7 boards and allows a spring loaded screwed down mount. This requires the motherboard to be removed from most cases, as they lack the latest and greatest innovation of a holey mobo tray (ahhhhh-men) *grin*.

The crossbow gives the most secure installation and will be easy to adjust - removing and reinstalling because you want to swap processors, or reapply thermal paste or simply reorient the heatsink will not require removing the backplate. The backplate comes with insulated double-sided adhesive shaped tape, to help it stay in place while you are screwing it in - no need to bother Mom for this, JonZ.

Personally, we've found that we need a flat blade screw driver to install or remove when mounting with the push-pins, and mounting the backplate was no great chore. For both installations use a cross pattern to secure opposite corners, while making sure you don't screw down too much on the first corner when using the backplate. We found a thin line of paste two-thirds the length of the heatpipe base on the center of each heatpipe gave excellent spread and processor heatspreader coverage.