The stock AMD cooler is based on a model that has been around for a while now, from the Althon64 FX days. It's a four heat pipe design, two per side through the fins. The 70mm fluid dynamic ball bearing fan is mounted using a shroud which holds the fan a little above the top of the fins. Max speed is around ~3800rpm, though it usually spins at ~3000rpm, at which speed it is inaudible outside of the case, even with tri-cool fans on low speed. The copper base is not particularly smooth, and has nickel plated aluminum fins soldered to it to dissipate heat.

Before beginning the test, the BIOS was configured to use the 4-pin PWM fan control and the calibration function run. Artic Silver 5 was used as the thermal interface material (TIM) do be consistent across both coolers. The heat pipes measure 8mm and are opposed in configuration, two projecting from each side.

Here you can see the idle and load differences in both stock and overclocked configuration. This processor required 1.500v vCore to get 3.4Ghz prime stable. As this Phenom II X4 940 is the multiplier unlocked Black Edition we were able to very simply adjust the multiplier from 15 to 17 for this run. Attempting a multiplier of 18 with a vCore of 1.525v resulted in thermal protection shutdown. 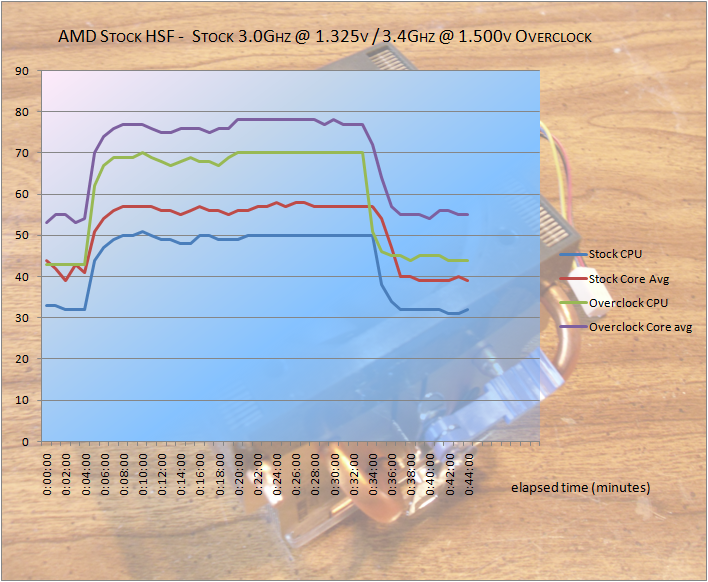 What we see in this graph is the CPU IHS temperature, and an average of the four cores. In default configuration, the CPU idle temp min was 32C, and took less than 2 minutes to hit the peak temperature of 50C under Prime95 load. After stopping the test, the CPU temp was back to 32C within 3 minutes. As expected the idle CPU core temperature average of 39C is higher than the CPU IHS temperature, and the corresponding maximum of 58C, too. It took longer to reach this maximum temp, some 14 minutes before finally nudging over from 55, 56 to 58. Roll off time is again 3 minutes. 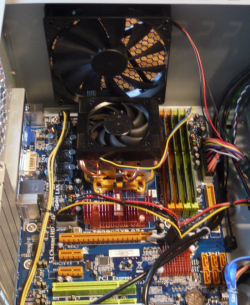