After launching the excellent and quickly copied heatpipe direct touch series, a minor revision was made increasing the number of heatpipes from 3 to 4. Looking in the box we see the same wide choice of socket mounting options as the HDT-S1283, along with the same 120mm fan. The heatpipe tower has numerous aluminum alloy fins attached, giving the rubber mounted 120mm fan the best chance of dissipating heat. With the same footprint as the HDT-S1283 reviewed previously, it is again a monster tower heatsink. Inside the Antec 300 it fills the case, coming close to the side panel. The open-sided design of the tower fins allows cross cooling to be effective, as in many cases not only a rear fan but top fan are utilized to exhaust air. 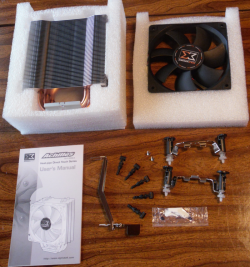 Mounting the Xigmatek HDT-S1284 is the same as with the HDT-S1283. The included AMD latch is simple to install and holds the heatsink tower in place securely, with no slop or wiggle. The grooved notches where the latch fits allow you to line up the base with the processor exactly before locking it in place. The bottom of the heatsink was protected with an adhesive film but, unlike the HDT-S1283 we tested, this time no residue was left behind when removed. More of the CPU's integrated heat spreader is in contact with the heatpipes, thanks to the use of staggered offsets. Core i7 compatibility can be added by purchasing the crossbow mount, (ACK-i7753). 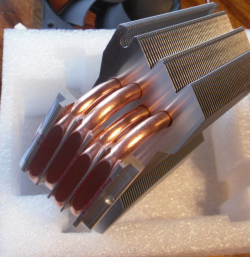 Xigmatek's method for mounting the fan ensures a quiet, vibration free yet secure mount. Included in the box is an extra rubber mount, a thoughtful touch we appreciated, even though it is actually quite difficult to tear the mounts. The fins on the heatsink are not sharp, but will skin a knuckle if you're not concentrating and slip whilst pushing or pulling a rubber mount into place. 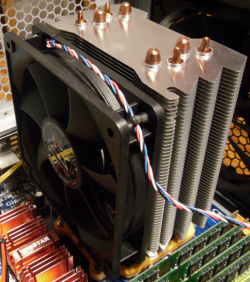 In the graph below is the CPU integrated heat spreader temperature, and an average of the four CPU cores. Results are shown for both stock 3.0GHz speeds and 3.6Ghz, with vCore of 1.325v and 1.525v, respectively. 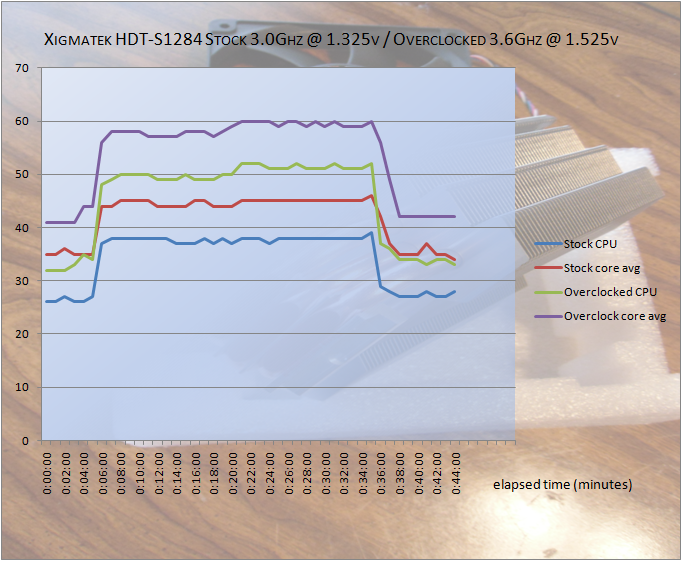 The stock CPU Integrated Heat Sink (IHS) idle temperature before beginning the test was 26C. Once the Prime95 run began, within two minutes the CPU IHS temperature reached 38 degrees, and didn't hit the test peak of 39C until 27 minutes into the test. Looking at the CPU core average, the pre-test idle low is recorded as 35C, also reaching a high of 46C after 25 minutes of Prime95. The CPU IHS roll off time was under two minutes to cool down to 27C. Similarly the CPU cores cool down quickly, cooling to 35C in under two minutes. These results are very close to the HDT-S1283 stock clock results, with the same improvement over the AMD stock cooler.

Overclocked to 3.6GHz @ 1.525v, the idle CPU IHS temp is 32C. It ramps up to 50C within two minutes of Prime95, but taking 11 minutes to reach the high temp of 52C. The CPU core average temperatures similarly increase from idle low of 41C to 58C in three minutes, peaking at 60C after 12 minutes. The cool down period for both CPU IHS and CPU core is around 3 minutes, with a nice linear drop back to idle temps.