Our previous review introduced this fan, a low noise sleeve bearing fan in a dark smoky grey shroud and white LEDs. It increases CFM over the standard fan as well as decreasing noise. Fitted with a 3-pin PWM fan header, it can be used as a CPU heatsink fan or as a case fan, depending upon your needs. 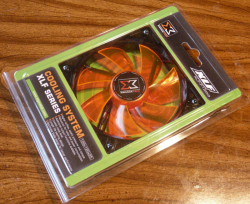 In action, the white LEDs add a stylish touch that works well with virtually any case design or style. The white LEDs are not overly bright, but still illuminate details inside for a nice look through windowed case sides. The transparent orange fan blades create a nice swirl effect in motion that is understated and not as clichéd as the now ubiquitous blue or red LED colored fan. 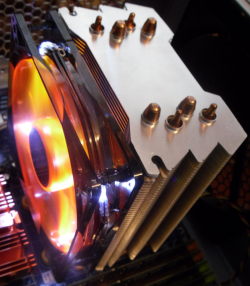 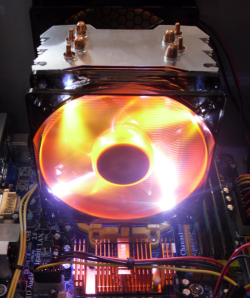 Below are the results for the HDT-S1284 fitted with the XLF-F1253 fan, in both stock and overclocked configurations. Before running the tests, the motherboard BIOS CPU fan configuration was updated and calibrated to use the 3 pin fan header and PWM speeds specific to this fan. 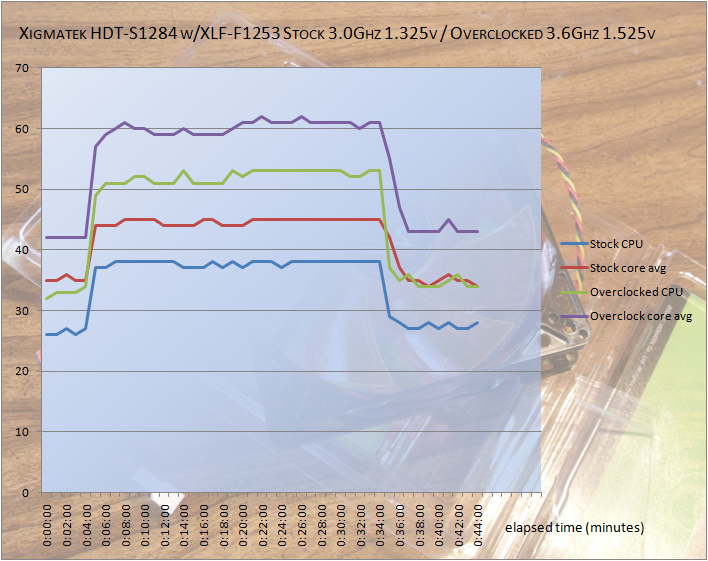 In stock configuration the CPU idles at 26C and 35C, for IHS and CPU core average respective temperatures. Upon beginning the Prime95 run, the CPU IHS temperature rises to 38C in under 2 minutes, with the CPU core average rising to 45C at the same time. Throughout the test only a small variation in CPU temperatures is noted, likely due to the different size blended FFT's being run through Prime95. After 30mins the test is stopped and the CPU IHS temperuature drops to a little over the pre-test idle in under 2 minutes. The CPU core average time similarly drops quickly, from 45C to 35C in around two minutes also.