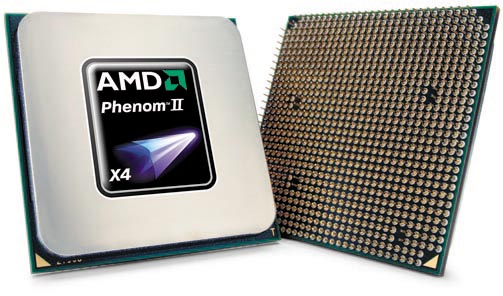 AMD Phenom II chip
There is a certain warm fuzzy feeling that's associated with rooting for the underdog. It feels like you are doing the right thing battling the evil, huge, all assimilating monster. Your "side" can do no wrong, it's victories are crushing and its defeats non-existent. The failures are at most tactical retreats, cleverly planned and extraordinarily executed. A rather convenient arrangement wouldn't you agree?

The above paragraph serves to outline one of the major perils associated with analyzing the perpetual AMD-Intel struggle: becoming enamored with the image of the heroic if tiny AMD, battling the evil, scheming blue giant. This only serves to undermine one's critical thinking and leads him down a perilous path of over-indulgence. Of course as with all things, the opposite extreme exists: it's a vitriol drenched corner where words such as "fail" or grim prophecies about immediate death of the green-team constitute the norm. We had to walk a rather fine line, trying to avoid falling in love with either of the above mentioned ideologies. Hopefully we've managed to do just that and this article ended up being that which it was meant to be: a lucid look at AMD's new CPU, the Phenom II (codename Deneb), that gives you a useful data-point in your quest for knowledge.

Having cleared those secondary aspects (please, don't misconstrue the above as a way of claiming pure objectivity: we're humans, and it's part of our nature to be subjective - we've just strived to ensure that that doesn't cloud our judgment), it's time to start our trip from a rather interesting base-camp: the year 2003.

Six years ago AMD introduced its K8 architecture, betting quite a bit on it. The Sunnyvale company had managed for the first time in its history to be rather competitive with its considerably larger "foe", Intel, with its K7 CPU. However, the K7 was beginning to lose its breath and a substitution was needed, otherwise the game would've become as boring as it had been in older times. The K8 was similar to Ronaldinho in his heyday: it came on the "pitch", outmatching its opponents with ease. This was helped by the fact that at the time Intel had taken an alternative path with its CPUs, opting for a rather deep pipeline and reduced work per cycle/clock, aiming to offset these two hindrances with very high clocks. However, those very high clocks ultimately proved to be unrealistic targets, and the Pentium 4 ended up losing that round.

Another significant breakthrough AMD achieved with the K8 was the establishment of its Opterons as a serious option for the highly lucrative x86 server market, which had been serviced almost exclusively by Intel up to that point. In fact AMD ended up being so interesting that it became capacity constrained, thus slightly shooting itself in the foot. There's definitely something to be said about the merits of properly forecasting/evaluating what you can realistically supply to your customers. However all was beyond peachy and for all intents and purposes it seemed like a new era was dawning, one in which the ruler of the roost had green feathers. Of course this is all quite simplified, and quite a bit of time could be spent on discussing the differing aspects that lead to the state of things during that timeframe. However, living in the past is a thing better left to the Quantum Leaping Scott Bakula, and we'd be far better off hitting the fast forward button leaping to the year of our lord (insert your deity of choice here) 2006.