... is just as engaging as reviewing motherboards! This isn't because the chipset guys are less talented, nor is it because the motherboard isn't an important part of any system ... no, it's because motherboards work as intended with annoying frequency. No magic driver updates that bring X extra FPS in popular game Y, no amusing PR battles being fought around them. They simply work and ceased being a primary determinant of performance long ago. The delta in performance between an entry level motherboard and the latest and greatest uber-enthusiast proposition is rather insignificant, all else being equal.

Of course, there are reasons for which expensive boards aren't cheap (although there is none for which the prior phrase is dumb, it just came out that way): better power delivery circuitry, more PCB layers, more BIOS options, more this, more that. Whether or not the above enchilada is relevant to the vast majority of users is debatable. All in all, the take-home note is that motherboard reviews aren't all that sexy ... unless something is actually broken, making one of the competitors stands due to its insufficiencies. Did we get lucky, or was it all just a drag? Read on to find out!

What we have here is AMD latest greatest chipset, oh joy! Wait ... scratch the "greatest" moniker; it's not quite that. The 790GX is AMD's latest value segment offering - this means aggressive pricing, adequate features and an IGP (Integrated Graphics Processor) as the value oriented customer may not want to spend extra for a discrete graphics card that might be underutilized in his HTPC/work system. Oh, and you want it to work without much hassle, because having your HTPC crash right in the middle of that really awesome movie, or be a pain to set up in the first place, is a sure way of alienating a large chunk of your potential customer base. All of the above have been thrown into the mix, with a slight addition of extra spices, as you'll soon see, but let's not be hasty and get ahead of ourselves - let's check out the newcomer: 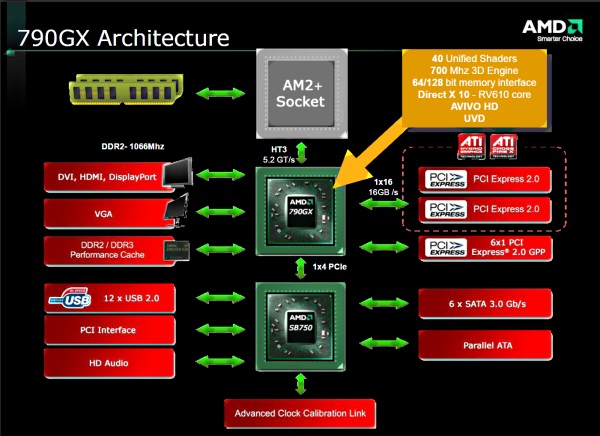 Starting at the top, we're greeted by:

Now, that we have an idea of how the topology of a 790GX motherboard looks, it's time to focus on the two really intriguing things that it brings: the HD3300 IGP and its sideport, and the SB750 with its mysterious and supposedly magical Advanced Clock Calibration.