The PC industry has been rather exciting as of late.  We have a legitimate arms race going on between NVIDIA and ATI.  AMD is pushing Intel out of the enthusiast market with exceptional value and impressive wideband architectures besting Chipzilla’s offerings with less heat and fewer cycles per second.  Dual cores have taken front and center, suddenly adding thousands of enthusiasts to the once fringe group sporting two processors in their PC.

Finally, after near hibernation, the audio processing component of the personal computer has change.  Creative’s X-Fi platform adds optional on-board memory and a new effects engine to better listening situations specific to PC users.  Whether or not the X-Fi can be compared to the revolutions like SLI/Crossfire or dual core processors is up the X-Fi owner; does he find value in the Crystaliser and EAX5?  For me, X-Fi was an instant disappointment as Creative still fails to embrace one feature I need, Dolby Digital Live.

I have been void of Creative products since the Turtle Beach Montego.  I have tried several of the cards, prompting Windows reinstallations to remove the nearly viral driver and interface software.  My “good ole days” came courtesy of NVIDIA’s Soundstorm.  The audio offering from NVIDIA’s nForce2 chipset led me to buy my current speaker system, the MidiLand S4 8200, which forgoes six channel analog inputs for Dolby Digital decoding capability.  With the death of Soundstorm at the hands of penny pinchers, the nForce3 forced me into depths of Dolby Pro Logic.  When it came time to build my SLI ready system, PC audio still had me yearning for three years prior when multi-channel sound could be conveyed over a single fiber optic cable.

Then came the HDA X-Mystique…

I was saved.  Despite a couple driver bugs forcing a couple of creative solutions to maximize listening pleasure, I was reunited with the encoded six channel goodness of Dolby Digital Live (DDL form here on out).  As I sit here typing this review introduction, I listen to woxy.com (please contribute to the future of Rock and Roll) over that single fiber optic cable from the back of my PC to the controller.  Thanks, HDA, for simplifying the back of my PC, and maximizing the enjoyment of the great FPS games released over the last 12 months.  I shudder to think how flat and dimensionless Quake 4 and Call of Duty 2 would have been with out my best friend in PC audio, DDL. 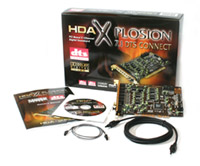 Now, we start the next jump in HDA’s progression.  HDA is now identified as AuzenTech.  They have brought distribution back in house, setting up offices worldwide for support.  AuzenTech Inc., the US branch office based in San Jose, was kind enough to send over a sample of their latest offering based on the C-Media CMI8770 audio processor.  The AuzenTech HDA X-Plosion 7.1 DTS Connect is here (http://www.auzentech.com/products_xplosion.html).

The X-Plosion retains the Dolby Digital Live capability of the X-Mystique, but the X-Plosion adds DTS Connect 7.1.