The firmware SD1A certainly doesn’t appear to have harmed the ST31000340AS drives. Performance is robust, and reliability unaffected thus far. Current pricing makes them a very attractive buy, but certainly not the only choice – currently Samsungs 1Tb drive is retailing under $85 USD, and Seagate’s own new 7200.12 series 1Tb is $99. I’m still happy with my 1Tb 7200.11 drives, but I won’t be buying any more. I’ll be looking closely at the WD Black series and the 7200.12, mainly because of warranty, but also performance. Seagate recently changed their warranty terms away from the blanket 5-year for all OEM, Retail and Enterprise drives, excluding some to be 3 year. Until digital distribution and storage of media is widespread and commonplace, 500Gb drives and larger are going to be useful and likely in service for a long time. With that in mind, I’d certainly expect to be using a drive I bought recently, at 1Tb or greater capacity, in four or five year’s time as they roll down from my storage server to my desktop machines. For performance, the new 7200.12 series use a 500Gb platter, that is quieter and faster than before. Claims of 130MB/s maximum read performance are seen in the literature, with lower power, quieter performance and smaller form factor (for the single platter drives). 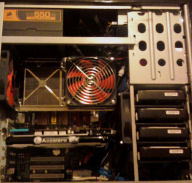 So how am I using these four ST321000430AS drives? In my HTPC/NAS with three disks in Intel Matrix Storage RAID 5 with the fourth disk as hot-spare and auto-rebuild target, running on a UPS. While no RAID array replaces a backup solution, it can give immense peace of mind for storage security. Load times for UT3 aren’t bad, either…