Neat trip this has been, hopefully enjoyable for those in front of the screen as well. We've seen that most of the time (FarCry 2, Call of Duty World at War, Fallout 3) a single X2 will suffice even when using high IQ settings. However, we were met with situations where QuadCF was required to provide a good, solid experience (Stalker Clear Sky, World at War with Edge-Detect resolve filter), and even had a case where AFR was actually a liability (Dead Space). What this comes to prove is that QuadCF can make sense, under certain conditions, but it's not a solution that should be in every PC under the sun: get it if you play at demanding settings and lavish resolutions, otherwise you risk being disappointed.

On the topic of micro-stuttering, no truly outstanding revelation came ... or, at least, none should've come for those that avoided the pitfalls of extremism (saying it does not exist versus saying it eats baby kittens for breakfast). It does, in the strictest sense, exist. It can be a true deterrent from a good gameplay experience ... however, the cases when that happens are already plainly bad: you need to be performance choked in order for the bulk of inter-frame deltas to shift towards being greater than 25 ms, which is the truly obnoxious zone. So, technically, if you're at 20 FPS due to rendering constraints, and not some sort of framerate cap, on a dual-GPU solution (as noted, queuing more frames will reduce the amplitude of the n-n+1 frame transition), micro-stuttering will be a big problem, but being at 20 FPS is a far greater problem in itself. Where would a single GPU solution be? Low teens? We'd like to reiterate that, if you're in that zone with a high-end single-GPU, going multi-GPU won't save you: don't do it, you'll just frustrate yourself.

The only solutions at that point involve either waiting for a new generation of GPUs, or adjusting your settings until you find a sweet spot (assuming that the bad performance isn't due to a bug). But if you're doing well with a single-GPU, and want more ... why fear multiple GPUs? We've seen that once performance is good, it becomes a non-issue. So whilst it would be trendy to complain about the absconded nature, and inherent absolute evil of micro-stuttering, we can't do so in good faith ... like all other things, it must be qualified, and you must understand how it works, and when it could affect you.

It would be a good point to discuss potential improvements on this front: it's probable that either the load-balancing scheme will change, requiring quite a significant technical overhaul, or that further AFR improvements will be implemented. If that is to happen, we'd expect some sort of heuristic algorithm to be included in the driver, one does a tighter management of how frames are presented, or perhaps the dropping of frames - it makes sense to implement the latter when the framerate is over the refresh rate of the display device, namely if a frame “comes-in” in less than 16.6 ms, it should be dropped, as it only has the potential to add tearing, with V-sync off, and having V-sync on tends to solve some of the issues by itself. However, the second solution is more important for times when performance is high, and at that point micro-stuttering becomes a non-issue.

Now, having handled those, let's close things up by touching two semi-sensitive topics:

Difficult topic to tackle ... we had been waiting for this with a baited breath, hoping to actually be able to pit a beefy CPU coupled with a good encoder (as opposed to iTunes which, and we say this at the risk of suffering the iWrath of many, is mediocre) against a couple of GPUs. However, what came out at the end of the pipeline in this case is underwhelming: GPU acceleration is only available in Vista 32, and, for those that can get it to work, it seems to be rather picky about a number of things.

For a short period, we were in doubt: should we install Vista 32 in order to do the test? But we opted not to do so: ATI, you're an innovator, a driver of technology ... this 32-bit only thing does not jibe at all with what you stand for, get us to look forward, not backwards! We'll patiently wait until the Transcoder, proof-of-concept and free as it is, looks like an application someone would use for common tasks, as opposed to a very selective novelty.

As for the other parts of the Stream Computing update, the new Stream SDK is a step forward, but there are still steps to take in terms of improving the documentation, supporting Visual Studio 2008 or more suggestive compiler error messages (however, 1.3 is a definite improvement on this front versus 1.2).

The 8.12s are a good driver set, having fixed a number of the more annoying outstanding issues (the 2D non-downclocking/downclocking bug, for example), and they did bring a number of improvements, some of which we've synthesized in the following two charts. 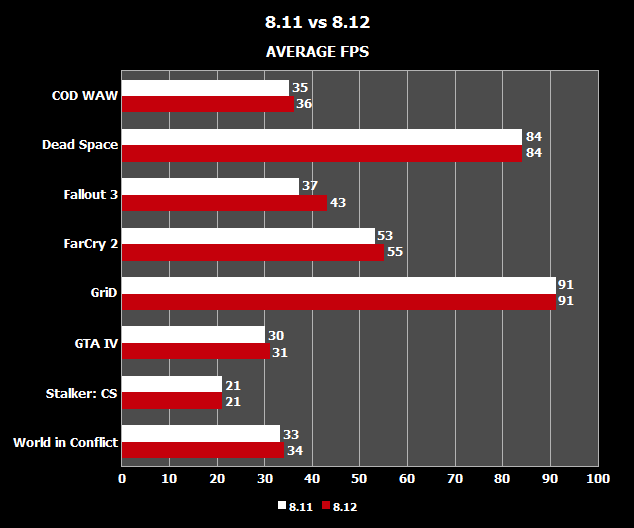 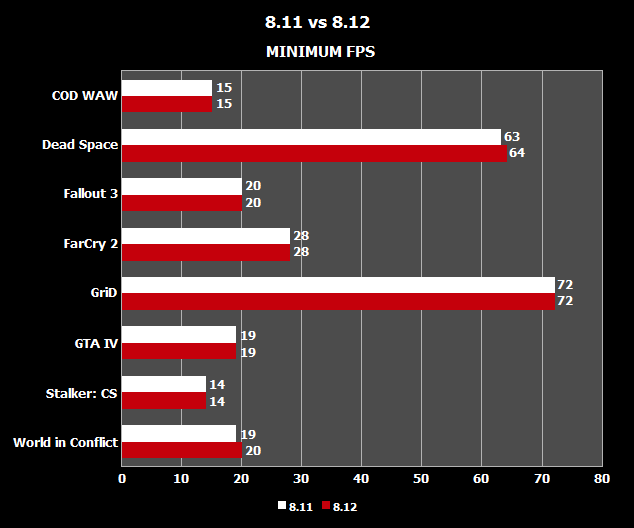 To gauge the impact of the 8.12 drivers, we broke out a 512MB 4870 and put it to work. You'll note that we tried to adjust settings so as to avoid overflowing VRAM. In case you're wondering why GTAIV wasn't included in the main tests, it's because it was a very late addition to the game arsenal (read 1 day before publishing) and because it is a rather awful GPU test. As you can see, the drivers are not quite exploding, but then again, without a proper reviewer's guide, obtaining the precise mix for causing a bang may be hard. All in all, if you were waiting for the 8.12s hoping they'd double framerates everywhere, they don't seem to.

The final, most important aspect for you: always, always, try to analyze things and gain perspective - do not fall for extremes, and do not allow others to draw conclusions for you!

Rage3D thanks AMD for the samples and continued support, as well as Alex Goh, Rys, William, Dean, Roderic, Sup and F for their insight.  You've been great guys!