When FedEX delivered the samples at 1PM on the 11th of last month, it was a rather happy moment. After all, with an epic crunch, the possibility of having the (a) review up in time for the NDA lift existed ... perhaps (it's worth noting that we had had access to the review drivers and had done the 4870CF groundwork). So with great haste did we proceed to unbox and plug the (heavy) cards into the eager PCI-E slots of our main testing-rig. 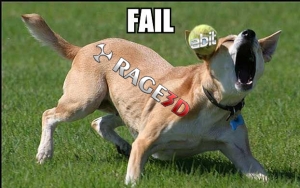 Now, as many of you might've noted, there's a strong phalic motive associated with the 4870X2 (just look at it's cooler) ... unfortunately, the Abit IX38 motherboard we use was less than impressed with that message and decided to be an upright girl - it refused to work with the cards! Thanks lass,  good time to set some boundaries. After a reasonable amount of tinkering, we got the couple to uneasily coexist by setting jumper switch #2 to ON (it's located on the back of the card under the crossfire connector, and not all cards seem to have it, although both our samples did). This jumper controls whether or not the PLX bridge chip enables PCI-E 2.0 (setting it to on disables it, counter intuitively enough). Alas, this was not enough though: semi-randomly losing the video signal is not nice, and when writing a review it's actually a killer. After exchanges with ATi and Abit, it became clear that Abit needed to update the bios for the motherboard ... when that will happen, if ever, is up to anybody's guess (the alternative of using the version 12 bios exists, for those having the board and looking for a present, rather than future solution).

At this point, we had missed the NDA lift. As a consequence, we opted for doing a few new/extra things around this review. And made what can, in hindsight, be considered a less than wise choice.

Since a lot of people (including ourselves) were curious just how a Phenom would behave when teamed with the graphics hardware and put through our array of tests, we decided to build a Phenom rig for this review ... since we had a bit of extra-time on our hands anyhow. Of course the sane choice would've been to simply grab another Intel motherboard and do the review on our usual setup, but sane choices look good only in retrospect.

We'd like to tell you that the Phenom adventure was as nice as playing with Nicole Scherzinger's nicely rounded and tanned bottom ... sadly, it was more like giving a big wet kiss to Tyra Banks' currently (that might've changed) flabby posterior. You'd still do it, but hardly with the same enthusiasm, and the memories would be not quite as ... satisfactory.

The first Phenom that we bought was a 9850 that suffered from a very bad identity crisis: it refused to function as itself and could only behave when clocked as a 9750, anything above made it quite unstable. This caused another week of delay as we tried to solve it. Finally, we applied the best solution: we went out and bought another Phenom, this time a 9950. Providence smiled on us as this one was actually a good chip, that even overclocked to 2.8 - this is what you'll see used in the review. We have a forthcoming 790GX investigation that will detail the Phenom woes/experience, for now knowing that it was a rather bumpy ride should suffice.

What is relevant in the context of this review is that we had to go from a 3.6GHz Core 2 Quad to a 2.8GHz Phenom, and the Core 2 was already becoming a limiting factor at that frequency - it doesn't take all that much thought to realize that the Phenom pretty much smashed us into the wall of CPU limitation head-first. As opposed to what some will tell you, and as you'll soon see for yourself, the CPU is hardly irrelevant in today's games, and even at high-resolutions/quality settings. There are still many things that the CPU has on its plate, and many places where it can become the bottleneck, especially so when using fast GPUs.

As a consequence of the above, we have deferred testing Quad Crossfire to a later date, when we'll have a functional Intel rig, or we'll extract a hefty overclock from the Phenom(s). For the time being, showing QuadCF numbers would've meant simply copying and pasting the single X2 numbers, since the CPU couldn't keep up with the task of feeding 4 fast GPUs (yes, we're factoring the fact that scaling is sub-linear with AFR).