NWN2 uses quite a bit of normal mapping, coupled with a dynamic lighting model and very high resolution shadowmaps and, as such, is a rather demanding title; in fact, it's one of the most GPU bound titles out there. It's also been a traditional sore spot for ATi (one that we personally experienced from the game's initial release, with dual X1900XTs and, afterwards, with dual 2900XTs), performance always being low here. It's time to find out if the numerous patches that have been issued throughout time, coupled with the MotB add-on, coupled with the new 3870X2 can lift the curse. We tested with AF set to High in the game's menu, and varied the level of AA through the same menu. 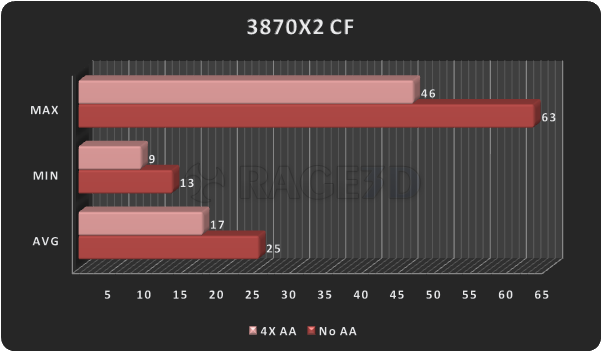 And now probably everyone's wondering to the myriad of graphs we usually hit you with - the explanation's quite simple really: they would've been pointless. The 3870X2 suffers from an odd bug that has it pegged at exactly 1FPS irrespective of AA, when shadows are set to high. Setting character, near and far shadows to low gives a semblance of playability, but we didn't test under those circumstances.

Strangely enough, the 3870X2 CF configuration actually manages to produce almost playable framerates even with those pesky shadows set to high, but enabling 4X AA quickly takes care of that. All in all NWN2 remains a poor performer.

Keep in mind the behavior noted here (the CF configuration running a game ok whereas the single X2 one produces 1 FPS), as we'll be coming back to it in the article's conclusion and give a possible explanation for what causes it.

Editor's Note: We're currently working with ATi on investigating the issue, so be sure to take these numbers with a grain of salt for the time being (tastes good and helps prevent several nasty diseases).